They say that shooting film slows you down, because you can’t chimp and have to wait for the roll to be developed. Some tell of the excitement of picking up a film after waiting for a week. I’m normally not that patient and develop myself when I find time. Most of the time, unless chaos takes over and produces some real slowdown.
Chaos must have taken over years ago in this case, and so I forgot two rolls of film in a box of photo prints. The box travelled with me from the continent to the Scotland, from there to England, thence to Ireland and back to the UK again. There the films lay, buried, until stumbled across them now, after I had started developing again.

Not all film cartridges were created equal –even for 35mm film. In the mid 20th century, it used to be common for cameras to have refillable cartridges. One of these was the Agfa Karat, and the cartridges I unearthed were for this camera. They had film in them, but I had no idea how long they had been lying there; no idea if the film was exposed and no idea what kind of film it was. 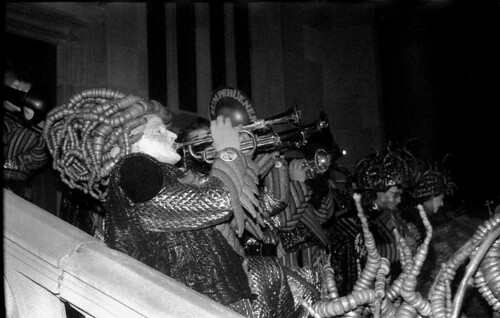 In cases like these, I opt for stand development in Rodinal. Rodinal almost always develops something and when you have no idea about exposure, stand development will often be your best bet. I received scannable results from (accidentally) cross developing colour film in Rodinal before, so I figured I couldn’t lose. 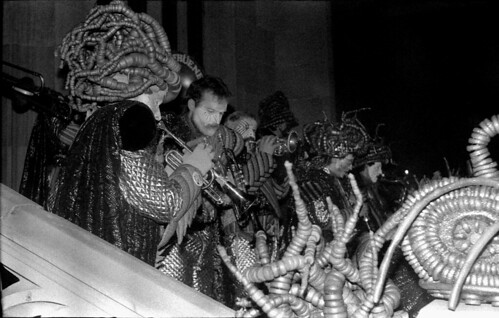 I pre-soaked the film for 2 minutes, then mixed 7ml Rodinal with 500ml water, started with 6 inversions and let the film sit for an hour, with one more inversion after 30minutes.
It worked too. One film came out black. The other turned out to be part of a roll of TMax 400 (the Agfa cartridge only takes around 12 frames worth of film). Some frames were blank and some aren’t fit for public consumption. From the ones that did work out, I could date the exposures to late 1990 / early 1991.
The film contained night shots which showed swiss performers in a carnival procession. We can infer the carnival season from the drum inscription ‘Sumpfhühner Guggemusik’ –Guggemusik is the type of music they play in Swiss carneval processions, and the group (http://www.sumpfhuener.ch/) still exists. 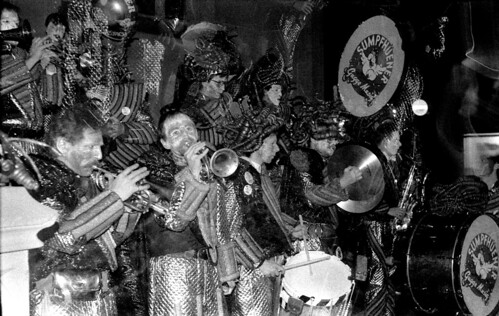 The attire, on the other hand, merely identifies the location. The headgear may seem strange to outsiders, but this is how Swissmen dress when they go about their daily business. Overall, I am pleased with the results –they even yielded one of the few accidental double exposures I like. These shots had been completely forgotten –I didn’t remember taking them nor would I have missed them, but the medium remembered. This is not the first time I developed film a long time after exposing it and the longevity of the latent image is something that continues to amaze me.
Film may slow you down, but it also freezes time in ways you can’t anticipate. In any case, I have yet to hear of anyone rediscovering latent images from Sony Mavica floppy disk.