That box of old negatives kept me entertained during lock down. For this post, I scanned from two rolls the old man shot at a Vietnam War protest in West Berlin in 1968.

This march is quite a well known and well documented event: it was held after a student congress and attracted over 10,000 participants instead of the usual few hundred communist activists split into mutually hostile micro-parties.

The first photos are from the assembly inside the university -there are plenty of near identical shots online- and he even managed to get reasonably close to Rudi Dutschke the leader of the socialist student federation.

I was surprised to see microphones from then right of centre mainstream media outlets on Dutschke’s lectern. Two of these, RIAS (Radio in the American Sector) and SFB (Radio Free Berlin) had been explicitly established as a counter-point to communist east Berlin.

All photos were shot on Ilford HP4, 35mm. Unfortunately, the archival sleeves had suffered some moisture damage and this is visible on some of the shots, but otherwise they were well preserved.

I guessed that my father was shooting with a Kodak Retina he had at the time, and this turned out to be correct. There is no EXIF of course, but while looking for background material on the event, I chanced on a brief video clip in which he strolls through the frame [at 1:04] with the folded up Retina around his neck.

There are plenty of photos of the march itself, along with some of the speakers at the closing rally and self identified members of the German labour party (SPD) siding with the students.

Now, the Vietnam war may have been central to the cold war and may have broken the Bretton Woods system. The protest itself may have been a key event for the German student movement. 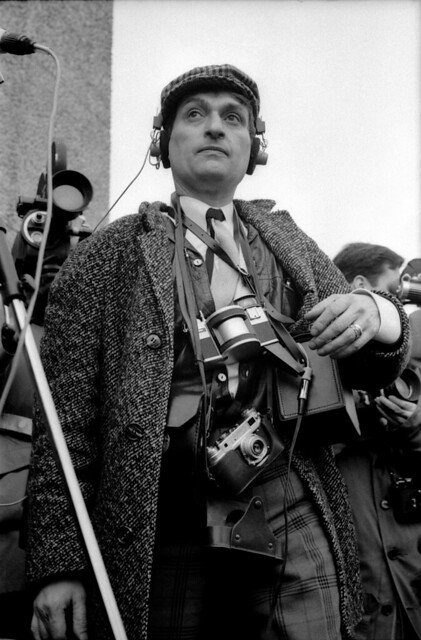 There is another shot of the same guy with a motion picture camera that seems to have made from a discarded Tommy gun.

They even had a literal lorry load of photo journalists by the road side.

And finally, even one of the protestors turned up with a TLR. Just strange that, socialist as the demonstration was, there is a notable shortage of Exaktas and Exas …