If the fixed lens 35mm Olympus mju ii is overpriced, the zoom versions remain more affordable, and I ended up with a zoom 80 model of this camera. It is bigger, has a slower lens (38-80mm f4.5-8.9) and, being a zoom lens, it won’t be up to the standard of the 35mm prime lens. 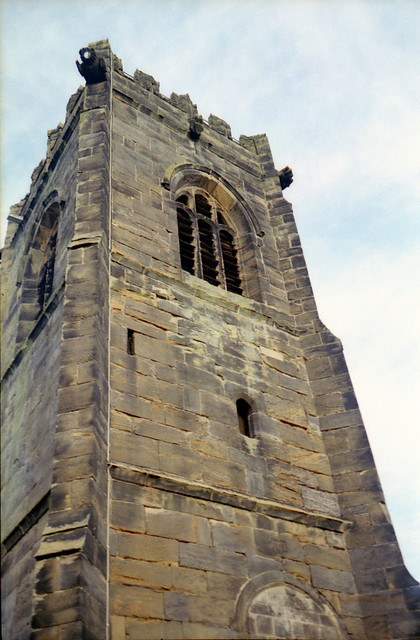 The camera is fully automatic, has reasonably good autofocus and autoexposure as well as a flash that is activated by default (though it can be deactivated if desired and remembered –I generally desire and sometimes remember to do so). Overall, I liked using it. While larger than the fixed focus version, it is small enough to operate one-handed. The clamshell design works well to protect the lens. The lens retracts automatically and the camera switches off when the cover is closed. (This latter feature can be a minor problem when shooting one-handed: you have to take care not to accidentally push the cover in. If you do, the camera will power down.)

There are a number of general reviews out there and I will not duplicate them here. Instead I will focus on one of its properties -considered a defect by most, a feature by some- which is often misdiagnosed. The lens of the mju ii zoom 80 is characteristically prone to producing neatly defined circular flare pattern in some, but not all images. These flare pattern are often believed to be light leaks, and tend to be blamed deteriorating seals in the extending lens barrel.

I don’t think they are light leaks, and here is why: For starters, the pattern looks to well defined. Would a light leak at the end of a fully extended zoom lens barrel give such a neat line and produce the same effect when fully retracted? Moreover, I have always seen this circular pattern confined to the image area, when light leaks typically spread to the sprocket holes in at least some frames. And finally, I actually did something about it which should work with a flare but not a light leak.

The circular flare pattern is clearly visible in the image of the street scene above. I re-took this photo, hand holding a lens hood for a small 50mm lens against the front of the Olympus lens barrel. The lens barrel itself does not move for focussing, so this was easy to do while shooting one handed. The circular flare duly disappeared and, since I hand held the lens hood in front of the lens, it was only shading the lens itself, not any openings that might have existed between the segments of the lens barrel.

Using the lens hood like this, I reliably prevented the flare in a number of other images where the flare effect was visible in an equivalent shot without the lens hood. This approach was reliable but cumbersome: the camera had to be operated one handed while the other arm held the lens hood. A lens hood that stays in place clearly would be better, if a lens hood could be attached. Unfortunately, there is no lens thread on the zoom lens.

The solution is cheap, easy and lacking in elegance. A lens hood can easily be improvised using black card and sticky tape. Because the lens barrel has three segments of different width, two hoods are required (the third segment of the lens barrel is too short to hold a lens hood but short enough to be shaded from a hood held in place on the mid segment.)

These DIY hoods worked reliably in eliminating lens flare. Over a number of test shots, any flares that appeared were eliminated by the lens hood. This method isn’t perfect, not least because the hood has to be removed and re-attached every time the camera is powered down, but at least it gets rid of the problem.

So the flares can be contained –should they be? Searching the web and reading discussions about this phenomenon I was amazed by the number of people who like them. One flickr member jealously asked the author of a photo how he had achieved this cool porthole effect. Some photographers may well lament that this feature is more readily prevented than consistently produced. The flares are likely to appear in high contrast motives, but sometimes they just don’t. All things considered, it may be the lomographers who remain disappointed.